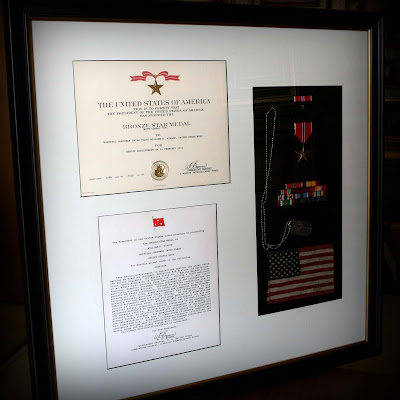 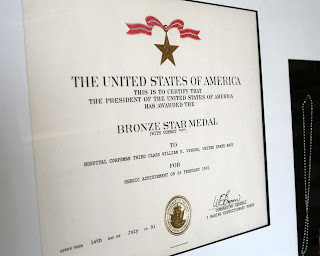 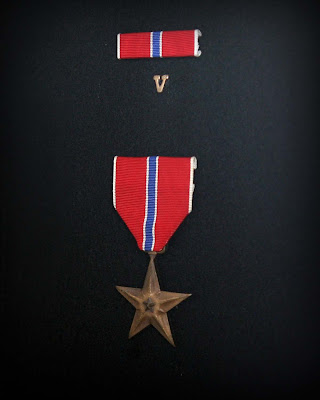 I don't really talk much about the framing we do here at the studio (we do lots) but every now and then someone brings in something to frame that is really fantastic. We just finished such a piece and I HAD to write about it. I hope I'm able to leave this post up and will not embarrass the person I'm writing about but, if he asks me to take it off, I will.
I want to write for a few minutes about Kelly Vinson from Woodland, a genuine local hero who we should all be so proud of. I have to tell a little about my own history with Kelly. Those of you who have known me for a while know that I spent many years working as the high school librarian at Northampton-East High School and I had Kelly with me as a library assistant. I think it's an understatement to say that teenage guys can be a little difficult (unless you're a teenage girl). They can be a bit undisciplined and mischievous and I firmly believe that they can't walk across a 15 foot stretch of floor without tripping over their own feet. At times Kelly could be the personification of a teenage guy -- mostly the mischievous part. One of great joys of working in education is seeing how young people grow and mature and it's always wonderful to run into them several years after high school and see how wonderfully they've turned out. I got to know Kelly again several years ago when his beautiful little Katie was born and he and his wife Sharon brought her in when she was 10 days old for photos. I was so impressed that day with how wonderful Kelly was with this little girl. He was so gentle and loving and he and Sharon were obviously thrilled beyond words with this little person. They came often for photos during Katie's first years and we came to admire and respect both Kelly and Sharon so much.

I remember being a little surprised when I first found out that Kelly was a nurse, mostly because I still had memories of him as a high schooler, but those thoughts went away pretty quickly when I got to know him as a man. He mentioned that he had been in the service and had served overseas as a corpsman in the first Gulf War. When Sharon came in after Christmas and told us that she wanted to frame Kelly's medals for his birthday, we were happy to do that. When she started pulling them out of the boxes, I was speechless. I don't know what all of the medals are but the one in its own special box with the written commendation and certificate to go along with it is the Bronze Star.
I read the commendation with tears in my eyes. Kelly received this honor for heroic service in the first Gulf War with a "V" for valor in combat. The details of his acts are in the certificate for the award and explain how he heroically, and without regard for his own safety, went to the aid of injured soldiers and cared for them. Kelly's other medals are in the frame along with this dog tags and the small flag he carried with him.
I'm terribly afraid that Kelly is going to feel a bit embarrassed that I've written about this here but I have felt very deeply that I wanted to since I first realized the extent of his service to our country. My father was also a veteran and there has always been a special place in my heart for those men and women who served their country. Thank you, Kelly, for what you did for those wounded soldiers and for what you did for all of us.
Posted by Carol Hedspeth at 1:38 PM

I have known Kelly my whole life and had no idea of what a hero he really was. Thank you, Kelly for taking care of your fellow soldiers and risking your own life for our great country.

I remember the first surgery my Mama had for colon cancer...Kelly was one of her nurses. When no one else would come tell us what was going on, he would. We really appreciated him being so good to her and us during that difficult time.