I've had so many comments and questions about the photo I created using my old cameras so I thought I'd tell you a little bit about each of them. Starting left to right leads you first to my Brownie. I don't think it was bought FOR me so my father must have bought it for some other reason though I don't think he ever used it professionally. I, however, dragged it to summer camp and 4-H meetings and school events for years and I'm betting that it still works great. The second camera is the Crown Graphic -- a monstrously big camera that shot 4x5 sheet film. All of the old B&W photos I've been posting on FB lately were probably taken with this camera and it's also the camera I used at the first wedding I photographed. I always envied my father and brother at weddings back then because they wore suits with pockets large enough to hold film holders and flashbulbs. My dresses didn't have pockets but I got to be pretty adept at shooting and holding a box of flashbulbs under my arm at the same time. The third camera is a twin lens reflex camera and I actually cheated a bit here. I shot with a twin lens camera for years but mine was a Yashica. This camera in the photo was an older model of my father's and I thought it looked better in the photo than my old Yashica. The fourth camera is my Minolta 35mm that saw me through all my years working at the high school. I probably shot hundreds of rolls of B&W film working at Northampton of ball games, clubs, student activities, etc. It was a great little camera and I can't imagine selling it though I haven't used it for a while. The fifth camera is a Hasselblad -- a beautiful single lens camera that I used for weddings and location photos for probably 20 years. I actually used several different single lens cameras during that time -- mostly Bronica and Rollei -- but I pulled out the Hasselblad for this photo. The final camera is one of the Canon digital cameras I use now. I have several digital cameras but I stick with the Canon brand because all of my lenses are compatible. This is probably my favorite lens -- an 85mm, f 1.2 -- just a beautiful, sharp piece of glass. Hope that explains a few of the questions you've asked. The one thing it should definitely explain is the pain in my neck and shoulders from carrying some of these around all these years. Remember to add a flash to most of these and they can get quite heavy. It's why I keep the ibuprofen in my car so I can pop one on the way home after a long wedding.
Posted by Carol Hedspeth at 1:16 PM No comments: 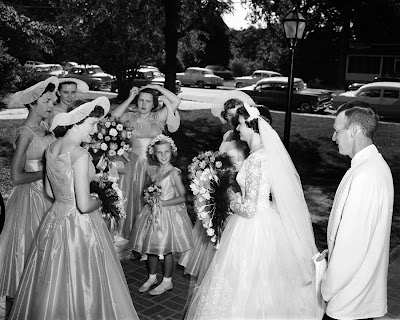 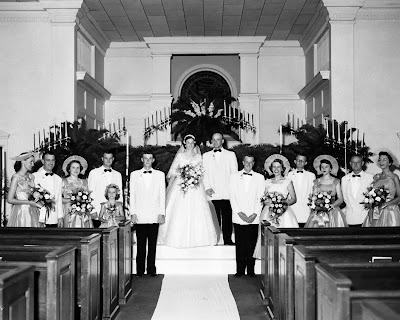 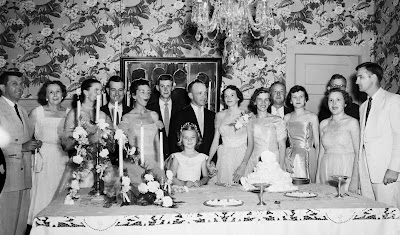 I feel a little bit like I've been cheating on my blog lately by spending too much time with my Facebook page. What does that say about the state of things anyway?!?

At any rate, it's been a long time since I've posted on my blog but I had something I wanted to share and I knew that I'd never be able to fit it into FB. Facebook forces you into a marvelous economy with words that sometimes doesn't mesh with my Hedspeth talk-iness. Anyone who remembers my father or my Uncle James know that a Hedspeth can talk the hind legs off a billy goat and I know I'm often guilty of that. And, if you know my cousin Jim, you know that this talking thing did NOT skip a generation!

I've always been fascinated by the idea of "Six Degrees of Separation." I'm not sure I completely buy it but I DO believe in what I consider the Southern version of that which is if you put two Southerners in a room together and give them ten minutes, they will find 3 people they know in common. Try it sometimes; it works.

I had a most serendipitous encounter while reading a book by the wonderful North Carolina writer, Marianne Gingher. It's called "A Girl's Life" and is basically about her childhood and growing up in Greensboro. I love her book and was really enjoying this one as I read it because she wrote of so many universal experiences in a young girl's life. As I was reading along and starting a new chapter, my mouth literally dropped open. I don't have the book here with me right now so I can't quote it directly but she starts out by saying that one of the highlights she remembered from her pre-teen years was being asked to be a junior bridesmaid in her distant cousin Billy Jenkins' wedding to Autry Brown in Potecasi, NC. All the locals here in Northampton county know why I was stunned since we probably all know Billy and Autry Jenkins and have driven through the sleepy patch of road that is Potecasi hundreds of times in our lives. My next thunderbolt was in realizing that my father photographed this wedding which means that I have the negatives. A quick tour through the dusty ledger books delivered the precious envelope to me, and I've printed out a few photos from this wedding that show a young girl who I assume is Marianne Gingher. I absolutely love looking at old wedding photographs. Look at all the details that place it in time -- the bridesmaids' hats, the men in white dinner jackets,the tablecloth -- it's all wonderful. Thought some of you might enjoy seeing it, too. And, it was too long to put on Facebook.
Posted by Carol Hedspeth at 4:22 PM 2 comments: