Happy Valentine's Day everyone! You've seen me write several times now that photographing a wedding is one of my favorite things. My dear husband (bless his heart) tries but doesn't really understand my romantic nature. I love chick flicks and flowers and thoughtful gestures and it's not unusual for me to get teary standing in the back of a church during a wedding ceremony even if I just met the bride and groom the day before. I love a good love story and hearing the music from "Out of Africa" puts me in that plane with Robert Redford every time. In celebration of the day, I took a minute to go through some weddings I've photographed since last Valentine's Day and put together a little collage of kissing. Sorry I couldn't included all my "kissers" from this past year but I didn't have enough time or space. Enjoy the day with someone you love. I'm going to see "The Reader" this afternoon with my sweetheart.
P.S. At least one of my "kissers" above is expecting a baby. Can you spot the parents-to-be?
Posted by Carol Hedspeth at 11:05 AM 2 comments: 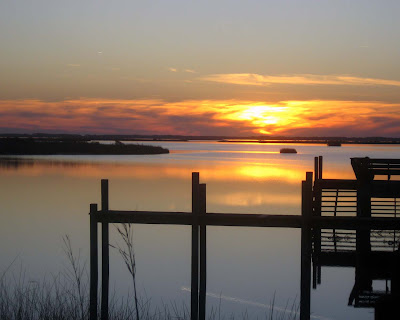 I'm leaving for a little vacation week at the beach and am psyched!! I know it's not exactly a prime time to head to the coast but I have to go when I've got free time and January through March is my free time with few weddings. (Of course, this year I'm hoping it's just the "normal" slow time and not the effect the overall economy is having on my business.) One of my closest friends from college -- believe me, she knows all my secrets -- is coming down from New York and we're heading to Duck for relaxation, conversation, good food and old movies. We had such beautiful weather LAST week but, even if it's freezing, we'll have a good time.

By the way, I wanted to include a photo and the one here is not even mine. My husband took it when walking around our neighborhood at the beach the last time he was there. I gave him a little digital camera for Christmas two years ago and he's had such fun with it. This is the scene I hope to enjoy next week.
Posted by Carol Hedspeth at 10:24 AM 1 comment: 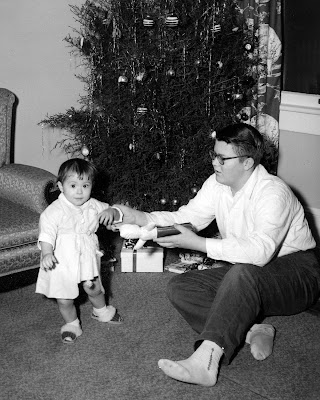 You'll excuse me if I get a little personal for a minute but I want to celebrate the life of my big brother, Tom, who would have turned 65 today. Many of you who are my age or younger may not know that I had an older brother. Tom was 13 years older and he left for college the same year that I started in the first grade. I always considered him an extra father rather than a brother because he took care of me and spoiled me rather than competing with me or tormenting me the way older brother sometimes can. He was far too young to die and all of us miss him terribly every day but I'm pretty sure he would have preferred that I tell a joke or relate a good story rather than sound sad today. My mother always says that Tom "wanted to be a Hedspeth but was really a Spivey" which is the highest praise she can give since it's her family that is the Spivey side. What being a Spivey means is that Tom inherited the best of my mother's family which included being kind, extremely thoughtful, generous and also really fond of a good joke. He was a real "family man" in the best sense of that term. Tom was a devoted son and brother, a loving husband and father, and a loyal friend to many. During his illness, there was a long list of friends and family who called to check on him and who still call his wife, my mother, and me to see how we're doing. I know his friends do this because Tom would have done the same for their families if the positions were reversed. I don't want to overlook the Hedspeth side of Tom either. For those of you who knew my father or who know me, the Hedspeth part is the one who could "talk the hind legs off a billy goat." Hedspeths enjoy nothing better than running their mouth (hopefully in a good way).

Anyway . . . I just wanted to talk about Tom for a few minutes here and to share my favorite photo of us together. Needless to say there are hundreds of photos of the two of us but I really love this one. It must have been my second Christmas and, as always, Tom was there to steady me and love me.
Posted by Carol Hedspeth at 5:40 PM 4 comments:

Looking Back -- "A Little Wedding History"

Occasionally I want to share some photos from the thousands (if not millions) of negatives that we have that have been taken since Conway Photo was founded over sixty years ago. I've pulled a few together and will try to offer a little time capsule just because I think it's interesting.
The photos above are from the weddings of some of our favorite folks through the years who are now truly related. The bride and groom on the left are Linda and Curtis Turner of Weldon who were married in 1956 (I think, someone please correct me if I've got the wrong date). The couple on the right are Donald and Linda Parker of Woodland who were married in 1962. My father photographed both of these weddings and he was truly happy that he helped me photograph the wedding of their children, Heidi Turner to Greg Parker, at the Outer Banks in 2001. Heidi and Greg's wedding was one of the last he photographed before his death and I think he was very happy to see the joining together of two families that he felt such a connection to. He and I are definitely alike in that we believe that being a part of your wedding makes you a part of our family, and we're always glad to see our family members happy.
Posted by Carol Hedspeth at 2:11 PM 1 comment: